Composer in residence at the Center Henri Pousseur (2014), IRCAM (2015), Cité Internationale des Arts (2015), Member of the Academy of France in Madrid-Casa de Velazquez (2016/17), composer in residence at the Art Zoyd Music Creation Center, member of the Académie de France in Rome-Villa Médicis for the year 2017/18, National Orchestra of Peru (2019), Juan Arroyo is actually artistic and musical director of the Regards ensemble and member of the Artistic Council of the Casa de Velasquez. 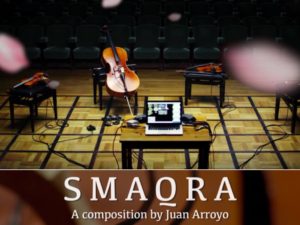 His music is rewarded with numerous awards such as the prize of the Salabert Foundation (2013) and the prize of the Academy of Fine Arts of France (2015). He receives prestigious commissions from the French Ministry of Culture, Radio France, Centre Henri Pousseur, SACEM and Donaueschinguen Musiktage. His works are performed by eminent musicians such as Ensemble Intercontemporain, L’Itinéraire, Linea, LAPS, L’Arsenale, Proxima Centauri, Sonido Extremo, National Orchestra of Peru, Vertixe Sonora and Tana Quartet. His music is performed at great festivals such as Ars Musica, Présences, Cervantino, La Chaise-Dieu, Ensems and ¡Viva Villa! 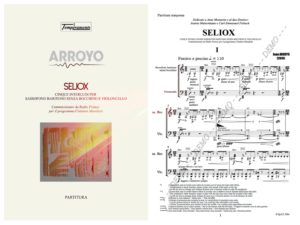 His compositional work revolves around sound hybridization. Indeed, in 2014, he began a fundamental stage of his artistic work with the construction of new instruments capable of transmuting their sound, the TanaInstruments. This allowed him to hybridize the perceptual cues of sounds in order to reveal the evocative and irrational nature of their substance, sometimes making them enigmatic. 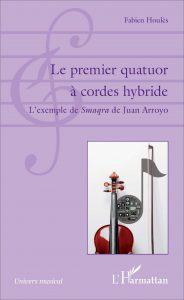 “Juan Arroyo has synthesized his work on hybridization around three fundamental areas concerning perceptual indices: gesture, space and timbre. Hybridization is at the heart of the scrambling of these indices. The expression “causal listening” encompasses different listening situations.
On the subject of his hybrid string quartet, SMAQRA, although the original musical object is part of a percussive timbre, the listening codes refer us to stringed instruments. The singularity and the interest of this work are these games of displacement, of movement between a causal listening and a reduced listening passing by many intermediate states of perception. Juan Arroyo explores different degrees by gradually blurring sound sources like a photographer or a cameraman making us travel from the concrete to the abstract, from materiality to immateriality by the game of the development of its objective.
Thus, the search for the development of reduced listening, favored in a general way by the electronics, constitutes a trajectory towards the unheard-of which the border between sound reality and unrealism is in total correlation with the literary inclinations of Juan Arroyo on the realism Magic.”